So I came in third place in the posting contest on Bearville Rainy Days last month, meaning I got to pick out one Sanrio furniture set for myself! 😀

I chose Kiki and Lala because I wanted the ADORABLE bed. But then putting it in my house made me want to have that be my bedroom instead of the regal/princess combination I was working towards before: 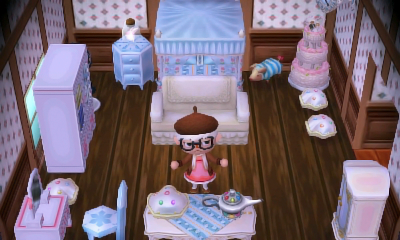 (I also had the princess lamp in one corner, but I moved that before taking the pic.)

So one thing led to another and, well… 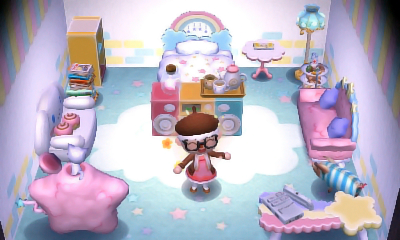 And now I want to redecorate my entire house.

Also, that room is still a WIP. And it’s in the basement because that is where I was trying out the bed. I’ll be moving the furniture upstairs (to the left room) when I get the chance.

(Oh, and thanks to Kat for the Cinnamoroll things!)

Anyway, here’s what I’d like to do with each room:

Main room: Remove the Weeding Day furniture that’s been there for three years and make this a living room. Possibly have ranch or cabin furniture. Probably try to put more plants and stuff in. Basically, this is the kind of look I want: Only more…unique somehow. EDIT: I unfortunately have no idea who took the first picture because I didn’t find it on the poster’s site, but the second is by chimeracrossing, apparently?

Back room: This can stay how it is. I still really like it.

Right room: Not really sure what to do with this one. Right now it’s being used for villager pics. I kind of have to have a room for them due to having so many, buuuuuut I don’t really WANT to have a pic room all that much… I’ll have to think about it.

Upstairs: Expand to 8×8 and put in more kitchen things (island, actual stove, etc.). Get that tea set off the floor. 😛

Basement: Put the gaming stuff back in. Actually figure out what furniture series to have because I don’t think modern will mesh very well with the rest of the house.

I want something that looks comfortable, but still cute, but not anything that would clash with a TV or anything like that. Yeeeeeeah. EDIT: I remembered what I wanted down there. Sloppy furniture. 😛

Honestly, I’m not sure whether it’s easier to have a specific way you have to design rooms (which is what I’m doing for all the other houses I have) or to just be able to go nuts and do whatever. Contextually.

So that’s about it for my town. The next major update should be when I can move in my next villager. Just two more to go before I can get back to PWP-rebuilding and landscaping!

Until next time! And if you have anything you’d like to say, please feel free to leave a comment below!

Hey! I'm Marina and this is my ACNL blog. For further information, you can check my about page. Thanks for reading!

How many people have visited this blog?